Welcome to the Assyrian Levies website,
my name is Gabriel "Gaby" Kiwarkis and I 'm your host.
"NEW" I travelled to the battle locations in Albanyia and Greece  Oct/2017 and I have included pictures and videos on the battle pages, I also met with Peter Hudson whose father Major Hudson was the company commander,  Peter shared more rare photo's with us, thanks Pete.

This is a community website and all are welcome to contribute, I thank those that have so far helped by their contributions and I hope I have done them justice on their pages, some have gone to extraordinary lengths to honour Assyrian Veterans and these I want to mention here;

Our sincere gratitude to; My good friends, the late Squadron Leader Colin Woodward and RAB Khamshi Odisho Moshe, may they rest in Peace.

""Each evening RAB Khamshi [Lieutenant] Beijo Rahana my Assyrian officer came to my tent for a talk and a drink and it was then that we planed the things for the day ahead. Luckily for us the British officers of the Levies, our Assyrians were fine linguists and nearly all of them spoke English.  these Assyrians were direct descendants of those who ‘swept down like a wolf on the fold’ in Biblical times, and bore the old names like Nimrod, Sennacherib and Tiglath-Pileser, natural soldiers having many of the Ghurkha soldiers characteristics, taking great pride in their marksmanship and mountaineering capabilities.
We who commanded them grew to love them dearly and to this day I feel I never had the privilege of leading better men"".

"It gives me the greatest pleasure to be here on your parade ground today to present you with the honour of the Royal Air Force Red Eagle Badge, an honor which by your past brave conduct, you so richly deserve...For the magnificent way in which you fought and defeated a numerically superior enemy in May of last year, this badge, which has an old history in the Royal Air Force, has been awarded to you."

“It was interesting to be in the aircraft with these brown skinned descendants of the mighty Assyrian Empires which had faded into the limbo of antiquity hundreds of years before the birth of Christ. Apparently these selected specimens had lost none of their ancestor’s courage, for they showed no hesitation at all in leaving the machine. Indeed I learned at a later date that throughout the entire training of the company only one man had been killed as a result of an accident and there had never been an instance of a refusal to jump or a request to be taken off parachuting”. 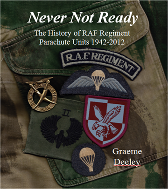 Recommended publication
All rights reserved/ all contents on this website must not be copied without the permission of the web master gabykiwarkis@gmail.com